Having started as a rock musician in the Chicago of the late sixties, I moved on to folk and  jazz in San Francisco, the Berklee School of Music in Boston and a degree in classical guitar. This included master classes with multiple students of Andres Segovia, a stint at Joe Namath's supper club, touring with Vic Dana and growing a family and music career in Huntsville Alabama,.

Having played clarinet from an early age, I was attracted to the big band music in my dad's record collection. When the Beatles came along, the guitar seemed the stronger magnet. High school folk rock led to blues, folk and jazz in Chicago, San Francisco, Boston and Atlanta. I gave myself totally to classical guitar until I suffered a serious hand injury that interuppted my guitar studies and took me into music retail, starting and later selling my profitable store called the Fret Shop.

Not one to stop moving, I began to produce multimedia music and audio which led to contracts with NASA, Disney, JVC, GE and the US military. I recorded huge orchestras and gospel choirs led by Grammy winning singers.

Even when I went to Seminary and became an ordained minister and built an ongoing ministry for the homeless, the music never stopped. My praise band consisted of down on their luck veterans of the Grand Ole Opry and teenagers with a fire to help the homeless.

Teaching music and religion at Martin Methodist college followed, where I also completed my Bachelor of Arts in Classical Guitar. My recent relocation to Nashville has already allowed me to play with some of the best and it  is allowing me to focus on my music full-time. 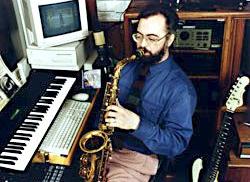 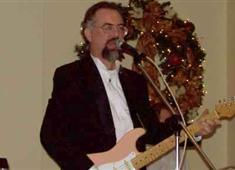 Rick's swing, blues and jazz bands are the end of a lifetime of musical experience!

Whether you met me performing for a NASA astronaut, in my formal attire, at the Space and Rocket Musem or behind the counter, in my jeans, at my store, the Fret Shop in Huntsville Alabama, you've met the same guy whose commitment to making great music has never ceased.

I honed my skills in multimedia.

This humble studio in my basement in Huntsville Alabama brought forth original music for the NASA CD-ROM "Space Shuttle Physics. It was also the location for the perfection of music recorded by Grammy singers, Mark and Joey Kibble of Take Six and the saxes and clarinets of the Monsters Inc. video game!